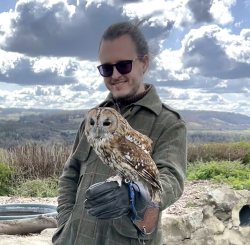 Moved to London from Sweden in late 2018 and decided late last year to fully focus on transitioning from mainly building TypeScript frontend applications to learn the whole stack for building smart contracts in Cardano.

Ever since 2015 I've had an interest in functional programming and was part of a startup that in 2016 wrote the second largest Elm frontend at the time. I'm also interested in finance and have invested in stocks for about 10 years and have always found macro economics very interesting.

This combination of working in web tech and an having an interest in finance was the perfect combo for blockchain technology and I've been going down that rabbit hole in my spare time since 2017.

After building up my personal finances from contracting, I found this to be the perfect time to invest in myself and take the step into the web3 space.

I started out as a web front-end developer in a small team in Stockholm. We were soon moved to London where we quickly grew from four to over ten developers, working on a framework for building customized streaming solutions for several of Discovery’s different streaming offerings.

In early 2020, our team was tasked with building and launching Discovery+ for the US market using the framework we had built. This was by far the largest undertaking of our team, and I was tasked with leading this project from our end.

The project took a little over a year until launch, and my responsibilities ranged from onboarding, teaching developers and guiding product and design teams. It was a very challenging experience and it taught me a lot about how to work with people across different disciplines, time zones and cultures.

The codebase had a strong focus on functional programming and type safety. It was all written in TypeScript and React, and used additional libraries ranging from MostJS and fp-ts to custom made Optics with inspiration from Haskell.