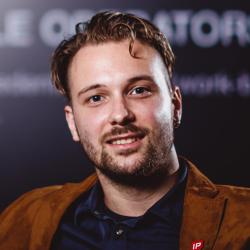 2007
Established a contract with Google as part of the Google Ad sense for advertisers. My website was successfully attracted by the large number of visitors up to 400,000 visits in one day for the promotional video clip, Christian the Lion.

2010
I was part of a project popularizing science multimedia presentation film "VASIONA" which was aired on 3 interactive screens. Video projection created an innovative software dataton Watchout. The projection has been shown in a Children's Cultural Center, in order to celebrate the year of astronomy to the popularization of science.

2012
Look’s different, I started working on the project Erasmus Austria, which represents an innovative platform for the exchange of students. Conducting students practice and improving communication between companies and universities.

2013
I founded the company WEB MEDIA LAB LTD dealing with internet sales. Then the popular international brand Groupon was representative of the new direction of sales of products and services on the Internet. Following the same concept, I had created the portal kupondiler.rs which specializes in selling coupons in Belgrade and Novi Sad.

2014
I participated in the Google Startup Weekend with the Bookme team and won first place in Serbia. As well as, participated in the promotion of export projects of innovative products in cooperation with the Swiss government. On the basis of what is presented in their technology parks, the new platform BoostIT.rs was created in Serbia. Business people and people alike, can use BoostIT.rs in the diaspora to help find a business partner within Serbia. Halfway through the year,  I began a partnership with DR Gilbert Center. I had participated in the creation of innovative software Lyceum, to test the competence of employees. Based on test results, the software would decipher advantages and disadvantages as well as the potential of each employee. The plan is that the program should improve the training of the staff and HR services when selecting new candidates.

2015
I was in contact with Harry Cheung, an investor from Hong Kong.  I began to work in ezyPlanet Limited ltd. For this company, I had the opportunity to work on global projects ezyCourier, ezyShot, True Allowance and Dateox which are dating platform startup projects.

2018
I began to work on a new project, IPification. The goal was to improve login security in mobile apps with seamless authentication, without using a password.

2019
I worked in NextGen Technology, as a Team Leader.  The main focus of the platform was collecting leads for Insurance companies. After 7 months, I decided to move to a new startup Sharebico, the Sharing economy App. In which, I am currently a CTO and a Full-Stack Developer.

2020
I launched my own startup, mediji.net with an idea to create a new online platform for the news. The web site app currently has around 40k visitors monthly and over 1k visitors daily.

2021
In January, I launched a new startup idea. However, this time it’s in the gaming industry.  Within the game Old School RuneScape, I developed results consisting of charts, statistics, leaderboards, and much more. The main challenge was to create a botting system and read data from the game via custom OCR. The project was complex and required mico-service architecture and programming OCR, from beginning to end.  After I finished creating RuneArena, I joined a company in which I’m developing an online “White Label” Poker. Later on, I had join to HelloTeam startup from the US via PrimeHolding JSC company at the position of Angular Senior developer where I am working on a platform that drives employee goals, performance, recognition, and retention.

Personally, I like really a lot Cardno, I have invested from the early days with the first version of Deadluse wallet, when the paper wallet was on the roadmap.

IT Startup - Online platform for dating

IT Startup - Platform for selling insurance